Apple is not the biggest maker of computers in the US. In figures just released by IDC, Apple Macintosh (Mac) sales grew 11.8% in the 3rd quarter of 2009, as Apple took a 9.4% U.S. market share, maintaining its position as the fourth-largest U.S. PC manufacturer. Apple sold an estimated 1.64 million Macs in the US over […]

The tech company we love to hate 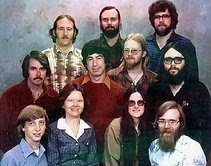 Remember that company from the last century whom many consider to be the inventors of personal computing? Older than Google, and even older than Apple (just). To […]