An extraordinary story caught my eye recently; there is one country which this year is forecast to see a higher spend on digital marketing than on all forms of offline marketing combined. This has never happened anywhere in the world before and although digital is growing everywhere, we are still some distance away from the global figures showing the same pattern.

This small island nation has for a variety of reasons reached a stage where it can reasonably claim to be the “Digital Capital of the World” (sorry Silicon Valley). London is certainly one of the world’s top digital cities; ‘Silicon Roundabout’ is an entrepreneurial hive of tech start-ups and it’s increasingly difficult to get ‘desk space’ in any Costa Coffee, Cafe Nero, Pret a Manger or Starbucks in the UK Capital; then you’ll need to fight the “Macbook Espresso Wi-Fi” (MEW) brigade for a power socket. Manchester, Glasgow, Birmingham and Edinburgh are close behind. 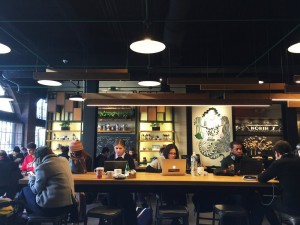 According to Strategy Analytics, this year we will find that the sum total of money spent in the UK on all advertising media offline will be exceeded by that spent online (primarily online display including video and pay-per-click, mainly Google AdWords). We’ve seen this day coming for a long time, but it’s still a major milestone.

Total UK advertising spend is forecast to hit £15.8bn in 2015, up 5.5% from last year the researchers said, and just under £8bn of that will go on digital ads, whether on search engines, mobile apps, newspaper websites or video-on-demand services such as ITV Player or 4oD. Of course much of this ‘digital advertising’ will be consumed on mobile devices.

Interestingly Strategy Analytics claims that TV is not in decline; rather its diminishing share is mainly due to advertising pounds diverted into digital away from declining press and radio advertising. The TV companies (ITV, Channel 4 and Sky) are successfully selling advertising on their websites including online video ads. Which raises a question: “what is TV?”.

We are getting close to the point when the word ‘digital’ won’t mean very much. In an age where people can stream video on their phones, surf the web on their TVs and games consoles and buy a device which might be variously described as a very large phone, a tablet or a small laptop, the old language of communications technologies and devices is increasingly inadequate. This veteran marketer reflects with a smile that in 1990, we considered that marketing was challenging, sophisticated and complex; we had no idea what was about to happen. Even Sir Tim Berners-Lee probably didn’t imagine what he was about to unleash on us all when he invented the web some two years later. Social media and smartphones subsequently offered new opportunities for users and brands. And it’s not slowing down; who knows what’s next?

Meanwhile, I personally hope that the Strategy Analytics forecast is accurate: So hold your heads up you Brits: shame about football (soccer), cricket and rugby but at least the UK leads the world at something; hip hip hooray!